Give
Menu
GIVE ONLINE

The History Of Grace Lutheran Church 100 Years and Beyond

Early in 1907 a group of friends from St. John’s German Lutheran Church met to discuss the possibility of forming a new Lutheran congregation. They shared a dissatisfaction with some of the restrictions of their church. Among their problems was the fact that they could not belong both to the church and to their lodge. They also wanted to share in an insurance program but were unable to do so. But foremost in their considerations was their feeling that they wanted their children to worship in an English speaking church.

This small group of men, Frank Foote, Frank Wienke, William Kiel and Malte Schwabe, inheritors of a Protestant ethic that is personified by Martin Luther, did more than just talk; they wanted action!

They asked Mrs. John Wienke to write Reverend William Eckert, at that time the pastor of an English-speaking Lutheran Church in Racine, Wisconsin, for advice on the steps to be taken for the formation of a new church. That letter was sent on to Reverend A. C. Anda, western superintendent of Home Missions of the General Council of the Lutheran Church of North America. He came to Woodstock on March 7, 1907, decided that the community could support another congregation and on March 17, having rented the German Presbyterian Church on Washington Street, held the first service with seventy-five people in attendance.

Three months later, on June 23, 1907, the organizational work having been completed and with Reverend Henry Behrens, newly ordained, as the first pastor, one hundred fifteen people signed the charter. Once again Reverend Anda came to Woodstock to preach on that Sunday of Celebration. They named themselves Grace Evangelical Lutheran Church.

We have to wonder if that original handful of people had any conception of the magnitude of influence they were unleashing in this community.

In 1908 Pastor Behrens resigned. Almost a year later Reverend Roger C. Kaufman accepted the call to become the second pastor of the church. His work in the service of God, the church, the community continued for the next forty-four years and, in 1938, was rewarded with the conferring of an honorary Doctor of Divinity degree by Carthage College.

Almost immediately after his installation as pastor, steps were taken to purchase the German Presbyterian Church on Washington Street which was still being rented by the congregation. The building was built in 1881 and had a purchase price of $2,000. Later $125 was returned by the Presbyterians as a supportive and encouraging gift. Among the first improvements made was the installation of electric lights, which cost only five dollars. Later the men dug out the basement to house the heating plant with the pastor working side by side with the men.

In 1924, the Ladies’ Aid Society made possible the purchase of the Moller organ still in use today. The total cost, including installation, was $5,000. It now resides in the sanctuary of Grace’s present location on Kishwaukee Valley Road.

In 1939, filled with missionary zeal and a sense of achievement, Pastor Kaufman led the congregation in the first formal service of the new Grace Lutheran Church in Richmond, Illinois, named for the mother church. Later, in 1952, Nativity Lutheran Church in Wonder Lake was established with Reverend Burton Schroeder, a son of this congregation, as its first pastor.

In 1950 the Reverend Robert L. Hooker was the Mission organizer at Wonder Lake. His work there so impressed the leadership of this church that on Pastor Kaufman’s retirement in 1953, he was called to be pastor of Grace Lutheran Church, Woodstock. He was installed as the third pastor of this congregation just after a major remodeling of the building was completed. Included was a completely new, modern front facade and tower, a west wing, and an entirely new basement which included two new kitchens.

It was during Reverend Hooker’s pastorate, in 1960, that an educational wing and connecting foyer were built. To make room for that, the parsonage, just to the west of the church, was moved to Backing Avenue on property donated by Mr. and Mrs. Clarence Foote. Clarence was the son of Frank Foote, one of the founding fathers.

In 1963 Reverend Raymond C. Shawl was installed as the fourth pastor. He set a fast pace in parish work and hospital and shut-in calling, retiring in 1974.

Rev. Irving E. Stangland was installed as the fifth pastor in 1974. He, too, was untiring in the work of the parish. His leadership was brisk, his influence far-reaching. He is remembered with particular appreciation by those to whom he brought solace in their time of sorrow and loss. He resigned in 1977.

Late in 1980 Pastor Hanson resigned and Reverend Paul A. Holmer accepted the call to become the co-pastor with Reverend Ahlstrand. He was installed in 1981, becoming our eighth pastor.

There were major problems concerning the condition of the church structure, and limitations within the building hindering the service of the church to its people and community. Accordingly, a Task Force of sixteen men and women was formed to make a study of the building’s condition and to report its finding to the Council.

It was recommended that property be purchased for the relocation of the church and that all available resources be utilized to step out in faith and build a new home where the future needs of the congregation and community could be met.

In October 1979, the Council called a congregational meeting and presented the Task Force findings. The congregation voted to accept the recommendation to relocate. The property was purchased on Kishwaukee Valley Road and U.S. Route 14. By late 1982, the roads and parking lots were in place. Ground was broken in 1983. One year later Grace Lutheran Church’s new home was dedicated. 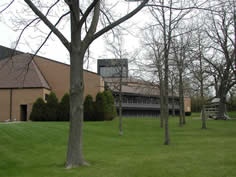 In 1985, Rev. Ahlstrand resigned from Grace having accepted a call from Bethlehem Lutheran Church in St. Charles, Illinois. Pastor Holmer was called to St. Paul’s Lutheran in Dixon, Illinois soon after.

Under the leadership of the Clark-Johnsons, Grace grew. New programs were initiated, worship services were added, and a new addition was constructed. The addition, dedicated in 1993, included a parlor, an expanded nursery, two new classrooms, and a social hall/gymnasium, Luther Hall.

Two associate pastors were called to Grace during the time the Clark-Johnsons served. Rev. Hollis Bishop came to Grace in 1988. He was called to St. John’s Lutheran in Hebron the following year. Pastor Beth Shaw arrived in 1993 and served until 1997. After ten years, the Clark-Johnsons resigned from Grace.

On December 1, 1997, Dr. Lawrence W. Wick began his call as Senior Pastor. Pastor Karl N. Redelsheimer was called as Associate Pastor and ministered at Grace from June, 1998 through November of 2000. Pastor Wick continued his tenure at Grace until March of 2001, working to move the ministry forward in faith into the 21st Century.

Grace entered a new century with new pastoral leaders, by calling Pastor Arthur C. Bergren to serve as Senior Pastor in 2001, followed by the call of Pastor Randy C. Willers to serve as Pastor of Spirituality and Discipleship in 2003. Chief among goals for this new century of ministry was to refine and deepen the congregation’s commitment to mission and vision. In October 2006, Pastor Arthur accepted a call to Geneseo, Illinois. Pastor Randy accepted a call to a parish in Moline, Illinois in October 2006.

On March 21, 2021, Grace called Pastor Amanda Bergstrom to be our lead pastor.

As members of Grace Lutheran Church, we gather and serve to Share God’s Grace with each other, with our community, and through our church body with the world, bearing witness to God’s love for all people. The ministries at Grace—our worship and music, our faith education opportunities, our ministry to the community, our small-group, children and family activities—all exist on the foundation and mission of Sharing God’s Grace.

We respond to God’s grace in worship through the breaking of bread, proclaiming of God’s word, and in songs of thanksgiving and praise. Our members invite others to come and learn about God’s love. Like Jesus, we minister to people in need around us. Through practicing discipleship and enriching our spiritual lives, we deepen our understanding of God’s love. We engage our spiritual gifts and raise up leaders both in the congregation and in our community. And, through teaching and modeling the life of Jesus, our children and youth experience the fullness of a life formed and grounded in Christian faith.

HAVE QUESTIONS FOR GRACE LUTHERAN?

Fill out the form below and one of our staff will answer your question as soon as we can.

Please help connect others to Grace’s Constant Contact emails. You can send an email to Carrie Fiorina to have an email address added to Grace’s update emails.

Visit our Social & Global Ministry at Grace and beyond page to learn how we are making a difference in our community and beyond. Click here for more information